Posted on September 6, 2019 by diealoguecafe 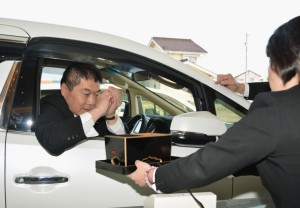 Only-in-America is usually how we describe the odd or quirky, but for this story the phrase reads only-in-Japan.  Will it catch on?  Will this be the start of a new trend?

‘In a first for Japan,’ reporter Alex Martin, in, Japan drive-thru funeral home to serve less mobile mourners (KYODO News, December 16, 2017) ‘a funeral provider with a drive-thru window has opened in Nagano Prefecture, allowing mourners to pay their respects without getting out of the car.’

The operator said the drive-thru window is the first in Japan. It is primarily aimed at allowing seniors and the disabled to attend funerals, but may also be used in future by people short on time.

“(It’s good because it) responds to the feelings of people who have given up participating in funerals,” Kazuhiro Ogura, 30, said after joining the tour.

“I think the chief mourner would be also happy about the fact that they have come to the funeral (even if they didn’t get out of their car),” he added.

How times they are a-changing.  For the full story with extra pictures click on the link: Pay respects without getting out of the car