Cough n up for coffins 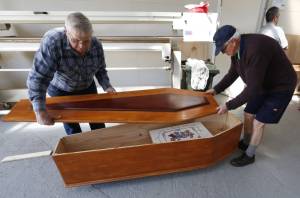 What do weddings and funerals have in common?

Well for the most part the central focus of attention in thess putting-on-appearances times, is the brides wedding dress and the deceased persons coffin or casket.

We say for the most part, because there are some exceptions where a wedding dress is repurposed as formal evening wear for later reuse or perhaps it was hired in the first place.  But for all these instances, there would be tens of thousands of dresses languishing in wardrobes.

And we say for the most part in the case of coffins, because they could also be rented and then reused, or owned in common as is the case in some Muslim communities.  In the good old days there was the parish coffin that was used over and over again.

But today coffins are the focus of attention, sold as such by the funeral industry who make sure that the rules around body disposal requires a coffin / casket for transporting the deceased to the grave or the cremator.  Taking pride of place – centre stage – at the front of the church or chapel or even outdoor event, coffins are one of the big ticket items in the funeral product range, with markups of 100-500 per cent on the cost price.

The greener wedding is making inroads led by high profile people like Stella McCartney.  Her dress designer was a member of the Sustainable Apparel Coalition in the UK.  People like McCartney are requiring suppliers to disclose where they source their materials from, if they contain toxic chemicals, what conditions workers are labouring under.

We need similar disclosures for products used and sold in the funeral industry. The number of trees ending up as coffins and within days incinerated or buried, all in the name of keeping up appearances, as part of a final send off, says a lot about our vanity and willingness to be a participant in the commercialisation of death and body disposal events.

For millenia there were no coffins – a simple shawl, blanket or wrap was sufficient.  When the coffin did come on the scene as the one size fits all parish box, a pall was draped across the box – hence we had the pall bearers.

A modern response to bring community back into the picture has been the rise of Coffin Clubs in NZ and Tasmania.  They allow for control and provide an opportunity for people with woodworking skills to contribute in a creative way to the farewelling of loved one. (See the featured image) 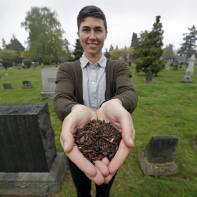 We are on the cusp of more changes if the Aquamation and Recompose methods get some traction, since coffins are not required.

Cough n up for coffins will no doubt at some time in the future become a thing of the past. Trees have much greater ecological values than being turned into human and pet body boxes.

Let them play their part within a living balanced ecosystem sequestering carbon and contributing to planetary wellness, rather than being milled into slabs of timber, machined and crafted into products to satisfy the whims of the dead and their onlookers. A full life-cycle analysis would reveal that the carbon released re-enters the atmosphere as greenhouse gas – in the case of cremation – which is now the choice for up to 80 percent of grieving families.

The more enlightened Recompose method of body disposal has a lot going for it. More about Recompose here: Returning to the earth