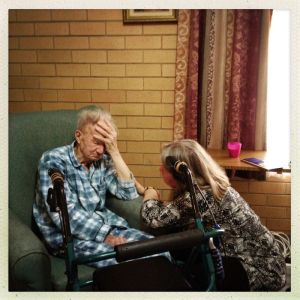 At a time when we’re getting on, that is, getting older, are we also getting wiser about aged care?  According to this report we’re not. What needs to happen to change the direction we’re currently heading in?

It’s a rather horrible reflection on the standards of aged care in Australia that a Royal Commission had to be called to examine why it has become such a nightmare for so many residents and their families.  It’s one thing to be in your sunset years, it’s another to think that the system doesn’t deliver on the message sprouted by many of the providers.

During recent isolation periods it has been even more distressing for those inside as residents, and those outside as family and friends, attempting to access their loved ones.

What the Aged Care Royal Commission has shown is that:

‘Neglect of the elderly is rife in Australia. An ageing population also means an increase in dementia, with many saying they would rather end their life than endure the disease. Our assisted dying laws, however, cannot accommodate this. In: Aged care, dementia and assisted dying, reporter Paul Barclay (Big Ideas, ABC Radio National, 1 July 2020) talks to a panel of writers about restoring dignity and empathy to aged care, and the limits of euthanasia.’

……..  Extract from the introduction to Getting On, Griffith Review, No 68.

‘In a world where seventy is the new fifty, old age isn’t what it used to be.

By 2060, the ratio of Australians aged over sixty-five will have passed one in four. This unprecedented demographic transformation marks a quiet revolution with far-reaching consequences for both individuals and wider society.

As the proportion of older people continues to rise, how will working patterns, leisure habits and modes of living be reshaped and refashioned to answer future needs? How will this shift in the balance of the population be addressed? Will our seniors be celebrated or marginalised, powerful or powerless? What approach will Australia take to the global phenomenon of long life? And how might listening to the wisdom of our elders change everyone’s world?’

……..  The ABC RN Big Ideas program is presented in conjunction with the Griffith Review. Recorded on May 28, 2020.  Duration: 54min.  Listen to the program here:   Aged care, dementia and assisted dying

For a link to the Griffith Review, click here.