Coffin ready (tick). Not shying away from the fact we die

Posted on November 5, 2019 by diealoguecafe

If the idea of having a coffin stashed away in the back shed freaks you out, then read no further. Because this coffin is not hidden away, it’s on show. 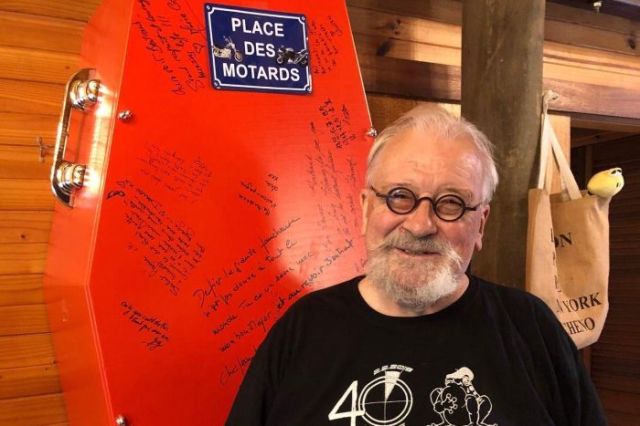 This is the story about French-Australian Bertrand Cadart, who, by his own telling,  has led “an incredible” life.  He is now doing what most people would think is not only incredible, it is more like crazy – certainly something they would not entertain (if that is the right way of putting it).

ABC reporter Jacqui Street tells his story in:  Coffin in the lounge room a reminder that ‘I’ll go with a bang’  (ABC Sunshine Coast, 29 Oct 2019).

The 71-year-old organised a living wake and his own burial plot after a terminal cancer diagnosis; those advocating for better community discussions around death have applauded his approach, says Street.

Now, following a terminal cancer diagnosis, Mr Cadart has installed a large red coffin at his home in the Sunshine Coast hinterland.

“It’s not because I was morbid or anything like that,” he said.

“It was more about my children. I thought, ‘OK, I am lucky enough to at least have an idea of when I’m going to die’, so I have no excuse not to try to make it as easy as possible for my two children.

“Especially with the mechanics of it all. Funerals are incredibly stressful, very expensive, and it has to be done very quickly, because you can’t say, ‘Oh well, we’ll take six months to bury Father’ — Jesus, pee-eew!”

There’s no beating around the bush with this 71-year-old who said he liked the idea that the coffin would take about nine months to break down in the earth.

“I think it’s good that you come from nothingness and then one day you end up being a shrimp in some female womb, and you take months before [becoming] a little person,” he said.

“And I figured out it should take about the same time for when you’ve done your dash to go back to nothingness.”

I bought a cardboard coffin because I wanted something that would dissolve quickly,” he said.

Mr Cadart said seeing the coffin in his home actually helped him remain positive about his illness, by reminding him that he was still alive.