In a few words 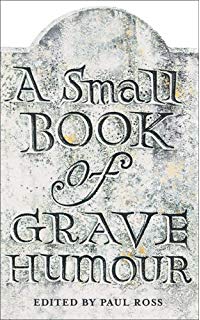 What’s to be said following the death of a partner, friend, child, colleague; someone we hold dear who has died?

The job of wording a eulogy usually ends up resting on the shoulders of a close family member or friend or in some cases a faith leader or civil celebrant who is paid to write up a story to be read at the funeral.

It’s a similar story with the writing of an obituary and an epitaph. What we get in each case is a personalised reflection of a life now deceased. In each case they can take different forms:

In The Small Book of Grave Humour, edited by Fritz Spiegl, reference is made to The Churchyards Handbook. There are some rather wise words contained within this tome ‘The object of an epitaph is to identify the resting place of the mortal remains of a dead person. It should therefore record only such information as is reasonably necessary for that purpose …’

The book includes many examples where these – shall we call them – instructions were not followed.  This one speaks of the dead man’s activities …John Jones Smith of Smoketown: He smoked his cigarette till from it came, That subtle venom spreading from its flame, Which poisoned every fibre of his frame, And laid him low, Yet whilst he smoked he languishingly sighed, It is but paper round tobacco plied, When like a flicker of a lamp he died, And rests below.’

Smokers have always been the subject of moral homilies in verse.  There is even a religious song by J.S.Bach entitled ‘Elevating Thoughts of a Tobacco Smoker.’

From The Churchyards Handbook again:  ‘All statements should be simple, eg.  “died”  rather than “at rest” or “fallen asleep”.

Here Lyeth ye body of Martn Hyde, He fell down a Midden and grievously Dy’d, James Hyde his Brother fell down another, They now lie interr’d side by side.

Speigly says: “The humour lies in the pun contained in the last line and has entered folklore with the limerick: There was an old fellow from Hyde …”  and so on.

There are some horror epitaphs in this book.  Be careful who you leave to write the last words.  Perhaps consider writing them yourself and leave them with your will or funeral papers.

Having said this epitaphs are becoming less common due to cremains being scattered in a garden or at sea.  There being no specific location there is nothing to have inscribed on a piece of bronze or stainless steel.

As a final parting observation, we would say it is unlikely that in years to come anyone will come to visit the said place. Experience tells us that future generations tend to forget rather quickly and without traditions to carry on visiting grave sites no-one will likely turn up, leaving the memorial to weather and deteriorate.  With cemeteries no longer permitting sites to be retained in perpetuity and the reuse of sites becoming standard practice due to lack of space, perhaps we ought to rethink the epitaph idea and be happy to leave the eulogy and obituary as the last words.